GOESP WallHack Cheat is what we recommend for beginners to develop their accounts much further via Wallhacking. It is easy to use and free to download. 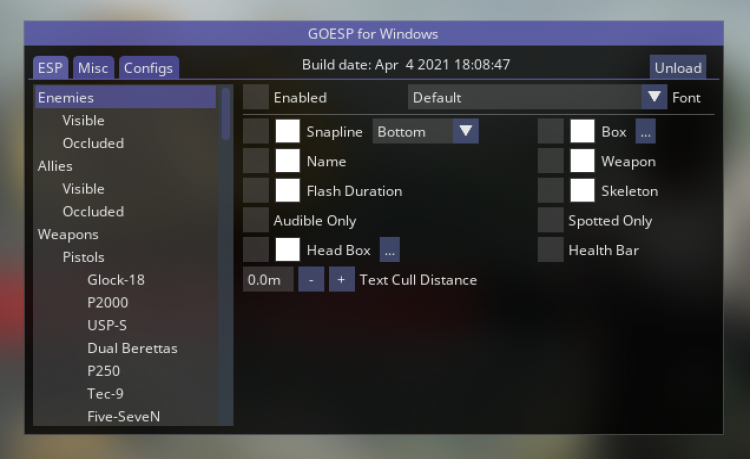 As you might know, Counter-Strike: Global Offensive has been on the top of the charts for a long time because it is one of the classics that you get addicted to. It is an FPS game that is so simple and yet so difficult. The game mechanics are simplified to the point where the game becomes comprehensible in a few hours by new players with no experience in any shooting game. Moreover, you don't need a super PC to run it, unlike most recent shooting games.

With all that being said, CSGO is still considered one of the most complex FPS games to master. So as a beginner, you will most likely need a CSGO Hack to have a chance of achieving a victory. And today, we are bringing the CSGO GOESP WallHack Cheat to you for that reason.

CSGO GOESP Wallhack Cheat gives you the ability to see the location of the enemy team, so setting a plan to win becomes much more possible for you. Unlike most of the CSGO Hacks, the CSGO GOESP Wallhack doesn't contain many features to reduce confusion and make it easier for you to utilize. The most important feature included is the Wallhack, and it is the strongest one in any CSGO Hack.

Overall, the player can use CSGO GOESP Wallhack Cheat to get a better Rank and to prank some friends. Thus, the game will become much more entertaining.

CSGO GOESP Wallhack mainly enables the ESP hack, which is enough to dominate in CSGO. However, some helpful and straightforward features were implemented as well by HacksHub to improve Wallhacking. These features are not overly complicated, and you will find them easy to understand.

Show Health is beneficial if you want to know your opponent's health, so you can expect the ammo needed to eliminate anyone.

If you don't know what a Wallhack is, it is a cheat used to make the enemy players visible through the walls or anything that obstructs your vision.

Is it safe to use CSGO GOESP WallHack Cheat?

In the CSGO community, there are many cheats, and the choice to use any of them is up to you. But despite that, the player is usually scared to use any CSGO Hack, fearing the risk of suspension. So, to eliminate this fear, HacksHub decided to design a secure and undetectable CSGO Hack. If you have decided to use our CSGO GOESP WallHack Cheat, you made the right choice because it won't harm your account unless you get reported by another player.

Don't worry if you don't have enough money to pay for the high-quality CSGO Cheats out there because now you can download CSGO GOESP WallHack Cheat from HacksHub for nothing at all. You won't have to do anything aside from clicking on the download button.

How to Run and Use CSGO GOESP WallHack Cheat For Free

Being experienced with Hacks is not a requirement to use our CSGO GOESP WallHack Cheat because it was designed that way. Check out the instructions to know more.

Note: Recording videos while using the CSGO GOESP WallHack Cheat won't make the ESP effect visible to your audiences as long as you capture the game, not the whole window. Also, force your video recorder to disable capturing the external overlays.