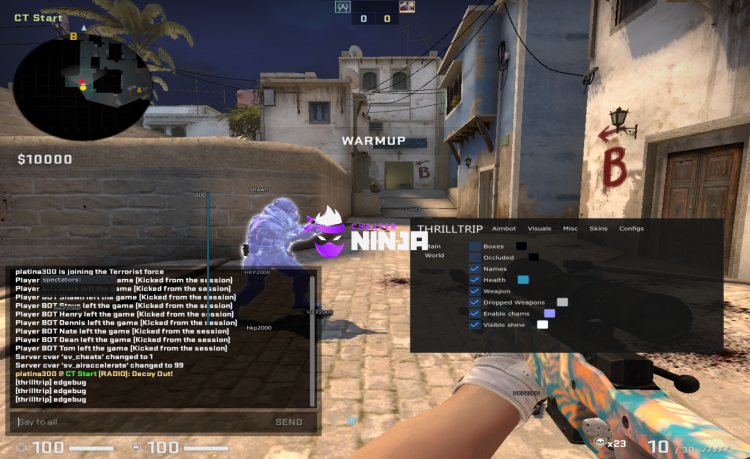 thrilltrip Movement Cheat for CSGO is a hack with many features including Aimbot, Wallhack, Skin Changer and other Movement / misc features

Casual Legit and HvH CS:GO cheats & hacks can be boring nowadays, and there seems to be a growth of the usage of movement cheats in CS:GO. But what exactly are these movement cheats? You know how it is really freaking cool to bunnyhop, strafe and shooting enemies while smoothly jumping around, well, this is exactly the thing these type of cheats let you do. They have a dozen of these movement features like, Bunnyhop, Auto Strafe and Edge Jump.

And the cool thing is that they do not only have movement features, they are usually normal Legit Cheats that happen to have some great visuals and mov. features built into them. And just like I meantioned above, it has every kind of legit feature you can think of, from Triggerbot to Backtrack!

How to Use thrilltrip Movement Cheat for CSGO

the source of hydravara was taken as a basis. It’s nice to play with the this thrilltrip Movement Cheat for CSGO, there are no lags, the norm is optimized.
no smart edzhbag, yet

also, write the bugs that you found while playing with the cheat. well, more suggestions for improving the functionality, new functions. Thank you for the attention.

– new menu (watch ss, by the way on the screen it is for some reason with less transparency)
– returned the old eb, hits edzhbags better
– added showkeys (new visualization with setting the position on the screen)
– added a color setting to dropped weapons and health
– changed the appearance of the spectator list
– changed the alert about the edzhbag (watch ss)
– now the choice of the skybox works correctly (correct sky names)
– fixed saving the aspect ratio, and many more small ones bug fixes.
– added clantag on